I have started a new blog here http://christophermgough.blogspot.com/
Posted by Chris at 10:50 PM 1 comment:

The contest is all over now and we are presently in Helsinki, ready to leave tomorrow morning. The last day we had a 2 and a half hour AAT. Nathan and I decided to start early today to avoid the showers that were predicted and also so we could be home early for the party. We thought that it was a very good decision at the end of the flight because the sky became completely overcast and only very weak lift. We expected many outlandings but the weather recycled and almost everyone made it home with good speeds. I finished 34th overall which I am a bit dissapointed with but I had a good time and learnt a lot. My third day error cost me a lot of points. The top finishers flew in teams with the exception of second place finisher CI from Lithuania. I congratulate all of the pilots in the contest on their excellent flying throughout.
Posted by Chris at 2:36 PM No comments:

When we arrived at the airfield this morning there were a lot of weary faces from the strain of last night's end of contest party. Team captains were rounding up their pilots for the awards ceremony, many pilots including ours didn't make it back to their own beds.

The weather has turned markedly cooler and sweaters and jackets were required by the less hardier types like myself. The awards ceremony was held at just the right time as less than half an hour after it ended rain had set in. We are in Helsinki at the Radisson downtown and are going to make a small tourist excursion and dinner tonight before we start our return journey tomorrow morning at 6:00am. 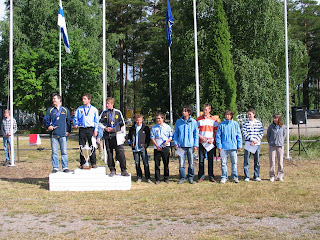 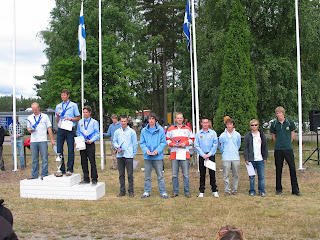 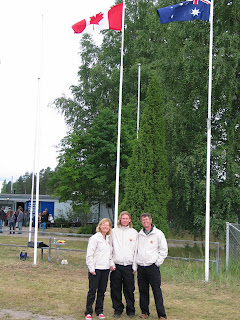 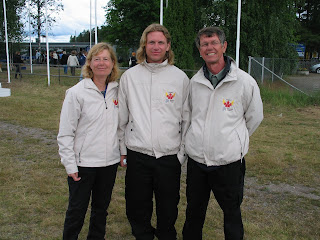 Yesterday's rest was welcomed by most and particularly by those needing to do the minor repairs and clean up jobs that are an inevitable result when you land approximately 40 gliders in farmers fields. There are airfields but not as numerous and closely spaced as we are used to in North America. Another shock when you land at an airfield is that tow retrieve rates at the contest are 220 Euros/hr.

While waiting for briefing to start we were entertained by Harry Sundström the president of Räyskälä Foundation on guitar and US crew member David Bargainnier on harmonica. Their impromptu jam was greeted with warm applause as was a later announcement of 2 euro beer for happy hour at 19:00.

The weather has turned a lot cooler and we again have cloud cover over much of Finland. A clear weather hole developing over the contest site and a 282km nominal distance AAT task has been set for both classes, the only difference is the start line locations.

The clear hole disappeared shortly after the start line opened it is now completely overcast. Chris and Nathan KS were the first to start and we have just heard them discussing going on or making for home. It seems last minute heroics is not on their agenda and they are not concerned about ending the task early. We expect to hear them calling a finish any minute.
Posted by Andy at 3:21 AM 1 comment:

The cell phone did ring and Chris was down about 30km away with Devin AY of the US team. It was a relatively simple retrieve but once more we had to derig the gliders and carry them out, two crews made it easier getting over the ditch between the road and the field. We arrived back at the airport at 20:40 as some Standard Class gliders were landing from their 550km task. The last reported landing was at 21:40, the longest flight reported was nine and a half hours and the last trailer home arrived at 2:00 this morning. Some pilots and crews will be relieved that today has been cancelled. We rigged the glider and Lynne and Chris are hosing off the dust as I write.
Posted by Andy at 2:09 AM No comments: