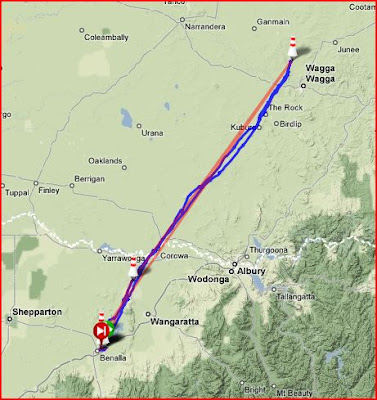 Last night there was a lot of excitement about the weather for today with talks of 1000km flights. It did not turn out very good however but I flew anyways. The LS-7 was taken and the Mosquito went to a camp at Mt. Beauty so I flew the Astir CS-77. My plan was to go to Temora as most of the locals were going in that direction. I was below 4500ft for most of the way out. I got a bit past Wagga Wagga and decided I needed to turn back if I wanted to make it home today. I heard a few of the locals on the radio turning back as well. I did 422km total which is good enough for first in Australia on the OLC so far. I was the first glider to launch this morning and the last one back. It was a blue day again which seems to be the only thing we have been getting. My first flight here was in clouds and all since have been blue days. Its been good practice and even in the blue the weather can be quite good here. The link to the OLC is here:
http://www.onlinecontest.org/olc-2.0/gliding/getScoring.html?scoringId=1&year=2009&month=01&day=25
Posted by Chris at 5:52 AM No comments: 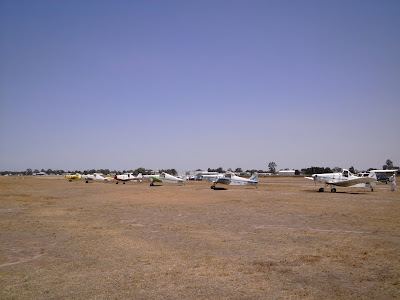 Since Christmas there has been three contests here at Benalla. They started with a club contest then directly after, the Victorian state contest and then the Australian Multi-Class Nationals. The Nationals just ended yesterday and it has become much quieter around here. There were 60 competitors in the contest which required 7 towplanes to launch every morning. They had some spectacular weather with top speeds in the 150km/h range. The highest speed was by Tom Claffey in an ASG-29 at 165km/h over 498km. Scores are here http://www.soaringspot.com/austmulti2009/results/. The picture above shows six of the tugs we used. 3 CallAir A-9's and 3 Pawnees. There was also a Scout but it did not fly everyday due to cross/tail winds.
I did not get much glider flying in but last week I jumped in the LS-7 and flew to Gough's Bay, a small town 70km south of Benalla. I also managed to get a flight in an ASH 25 with Dave McManus the winner of the open class with Paul Mander. Dave is a former junior pilot who flew in the worlds in England in 2005. The ASH 25 is unique because they have added LS-8 winglets to it. I like the look of it but they tell me it does not go that well.