Mobs of Kangaroos at the Golf Course 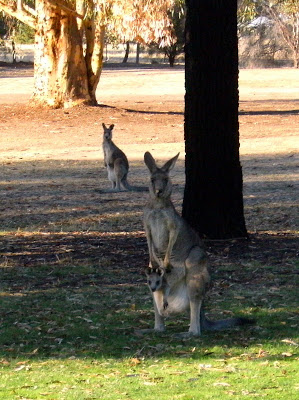 I went to the Benalla Golf Course again to get some pictures of Kangaroos. I was quite successful this time and got some nice shots of females with there baby joeys. There was a mob of them sitting on the green of a hole. They are Western Grey Kangaroos and are a bit of a pest at the golf club. 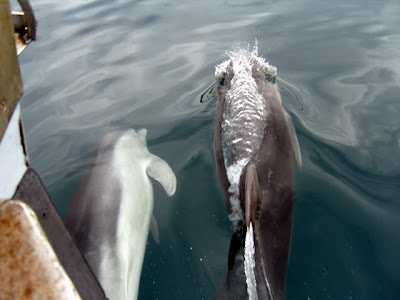 Since the mid week operations here at Benalla have virtually finished I have had some time to discover some more of Australia other then the airport. I went down to Torquay on Monday and met up with Simone. We signed up for a beginner surfing lesson and both of us managed to stand up and surf for a bit. We then went to Queenscliff on Wednesday and did a dolphin/seal swim and snorkeling trip. On Thursday we took the ferry to Sorrento. It was a bit overcast on the way over but by the afternoon the sun came out and we had a nice view of the Rip, the narrow entrance to Port Philip Bay. 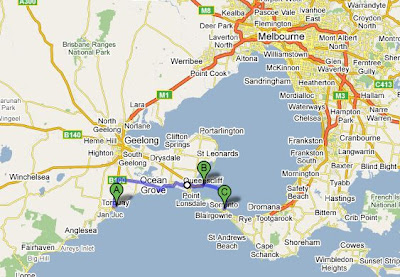 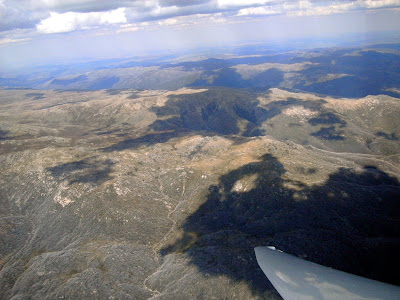 Mount Kosciuszko
The last two days in Benalla have been fantastic, especially for this time of year. In the hills we have been getting over 10,000ft with lift up to 10kts. The club has also just purchased a very nice LS-4 from a syndicate at the club. I managed to get in its first two flights as a club glider. On Friday, I was meant to tow but got someone to cover for me. I made sure the LS-4 insurance was sorted and got into the air a bit late at 2:15pm. I made 7500ft almost right away and went to Mt Buffalo. My camera batteries died after just a few photos. I had to wait another day to get some pictures. In the hills the cloudbase was getting to 12,000ft. I visited Mt Bogong again, the highest peak in Victoria, then headed to my favourite turnpoint, Gough's Bay. The day was deteriorating but with my left over height I final glided around Dookie for a total distance of 373km. Friday flight. On Saturday, I got myself ready much earlier and planned to go to Mt Kosciuszko, the highest peak in Australia, at 7,310ft. It is about 200kms from Benalla and over mostly unlandable terrain. There are a couple of airports along the way and if you really get into trouble you can fly down a valley to get to some paddocks. On my way out was a bit of a struggle as the convection had not quite gone through the inversion. I had to dump my water and had the wheel down at one point. Once I reached the clouds in the hills it got almost easy with cloudbase going to 10,500ft. The run to Kosciuszko was pretty straight forward. When I got there I got out my camera (with charged batteries) and snapped a couple pictures. The actual top of Kosciuszko is hard to pick out. I read this in Wikipedia

"Various measurements of the peak originally called by that name showed it to be slightly lower than its neighbour, Mount Townsend, and the names were thereupon transposed by the New South Wales Lands Department, so that Mount Kosciuszko still remains the name of the highest peak of Australia, and Mount Townsend ranks as second."

I headed back for the most part the same way I came in. I snapped a few pictures of Lake Dartmouth and Mt Bogong on my way. At one point I had to remind myself to concentrate on flying fast instead of taking pictures so I could make it back to Gough's Bay for a shot. I made it to Gough's Bay at 6:00pm took a picture and headed back to Benalla for 6:30pm. Total distance 482km. Saturday flight. An unexpected couple of days.