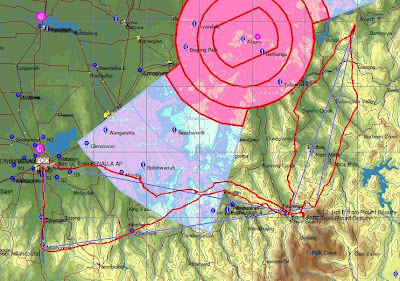 Today I had my first trip into the hills to the east. Ben Loxton came out again this weekend and we started out together but split up shortly after. There is still a lot of smoke in the air from the fires making the visibility a bit murky but still good conditions. I had a pretty good run to Mt Beauty where there is a soaring club. It is right next to Mt Bogong, the highest peak in Victoria at 6,520ft. I went north from there with the intention of going all the way around the Albury control zone. I hit blue and then decided to come back down to Mt Beauty to get home. I took another look at Mt Buffalo and was going to go home but I figured I would go to Lake Nillahcootie first. I had a good run there bumping myself to final glide height in the clouds. When I made the turn at Nillahcootie I hit lots of sink in the blue and quickly went under final glide. I had to take some weak climbs to make the rest of the way home. I forgot to bring my camera which is a shame because there was some nice photos to be had. Feb 22 flight
Posted by Chris at 2:50 AM No comments: 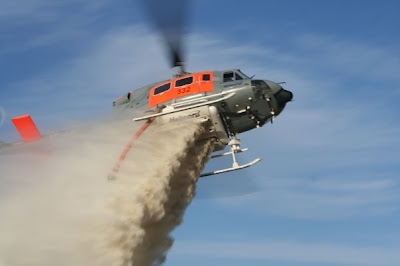 As you may have heard in the news there has been record breaking fires around Victoria close to Benalla. There was a large one about 40km to the south of Benalla that was pushing towards us but has been contained. There was one to our north-west about 20km away but moving the other way. The main highway to Melbourne was shut down on Saturday and most of Sunday. People who drove through afterwards said it was looking quite ugly with charred land and animals on the edges. We have a chopper pilot who fights fires that is based at the Benalla airport. He has been away most of the week fighting the fires and came back for a bit with some horrific stories. He is flying the helicopter in the picture above. It is raining right now here and hopefully it will be the end of fires for now.
Posted by Chris at 1:31 AM No comments:

Some Fantastic Weather at Benalla 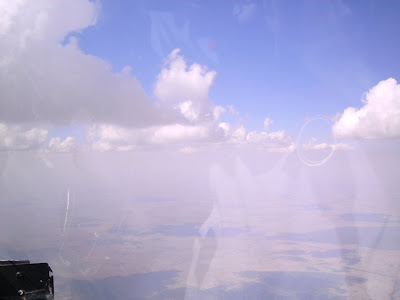 The past week has been extremely hot with temperatures mostly in the 40's. This has translated into 12,000ft cloud bases and excellent soaring conditions. It was miserable flying the tug in those temperatures but I did get in some soaring of my own in. On Wednesday I had a flight with a young German girl who is backpacking across Australia in the club's new ASK 21. We got to 12,000ft and flew 209km without going out of glide range from the field. ASK 21 flight On Saturday Ben Loxton, a 26 year old pilot who just flew in the nationals here came up to Benalla to do some more flying. We decided to fly together along with a young Kiwi pilot who also flew in the nationals as well as joeyglide and has been living at the club. I had planned to do a 750km flight of Temora-Hay but had to take a relight and had a bad first leg which made me abandon task. I could not find a good climb above 6000ft until 170km in. Also my pda and colibri were not working. Ben had got to 11,oooft and had a much better run. I met up with him later but ended up going home early out of frustration. I flew 525km and Ben flew 750km OLC. Saturday flight Ben Saturday Sunday we expected to be a worse day and I was not planning to fly. Ben was keen to fly however, and talked me into flying with him again. I am glad he did. We started late and decided to go to Leeton, about 230km away. At the start the thermals were going to about 7500ft and 3-4 knots climb. Once we got to Urana, 130km out there were good looking cloud streets going straight to Leeton. Our first climb was 7.3 knots to 12,000ft. The rest of the way was much the same and when we arrived at Leeton we had plenty of time to go further. We were thinking about Lake Cargel 365km from Benalla but decided to turn back 50km short of it at 4:30pm. On the way back we had to avoid a number of thunder showers forcing a few changes from track. I started on a final glide home but noticed my tail wind had turned into a strong headwind and Benalla was under a large piece of overcast. I took a turn back to some cu's to get some more insurance height. Ben and I thought we were the last ones back but an hour later Michael Sommer came back in between the storms. It was neat to see a glider doing a beat up with lightning strikes in the background. I flew 652km at 122km/h Sunday flight Ben Sunday Michael managed to show up Friday night, fly 2 1000km flights and be back to work Monday morning. Just another weekend for the world champion. 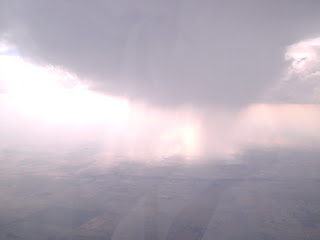