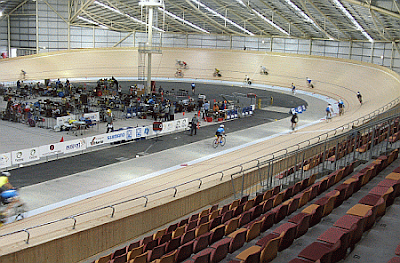 This weekend I visited my Grandmother and Aunt in Melbourne. They came down from England to first visit my cousin Pete and his girlfriend Jo then head up to Brisbane for my Great Aunt's 100th birthday. The weather was not very nice in Melbourne so we were looking for something to do indoors. My cousin Pete is into bikes and a leg of the Track Cycling World Cup was going on in Melbourne at the time so we got tickets. I was not sure what to expect and thought it might be a bit of a bore. It turned out to be quite an exciting form of racing. I particularly liked the one-on-one sprint riding. The riders seemed to like being at the rear for most of the race and then sprint to the front in the last lap. This made for some very interesting tactics and sometimes the riders came to a complete stand still and it became a cat and mouse game to see who would go in front. It kind of reminded me of the start gate in a gliding contest.
Posted by Chris at 4:47 AM

You wrote:
The riders seemed to like being at the rear for most of the race and then sprint to the front in the last lap.

The way to win cycling sprints at more then 60 km/h,
the same aerodynamic tactic is used in motorcycle races where they call it SLING SHOT at over 200 km/h