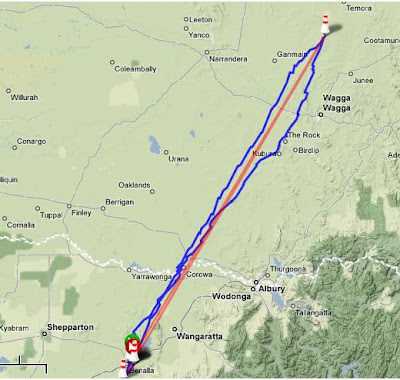 Yesterday I took out the Mossie for a flight. I had planned to try out the hills but it was blue and the locals recommended staying in the flats. Most of the guys were planning to go to Temora so I decided I would go that direction as well. I declared The Rock and figured I would go past if it was good. I was hitting good lift in the blue including a thermal that was showing 10.5kts on the 30s average most of the time and got to The Rock at 2:00pm so decided to keep going in the direction of Temora. I planned to go until 3:00pm then turn around. I stopped 245km from home, 25km from Temora. The trip home was much more difficult with the lift getting further and further apart and thermals getting harder to work. Over Corowa I got a bit low and thought I might have to land there but managed to scrape away. I started a final glide back to the club and hit a good thermal along the way and took it. I did another 12km leg past the club to pick up a little more OLC distance. The total OLC distance was 520km which is a personal best for me. It also placed me in third place for the day in Australia and first in Benalla. We were happy to beat the Corowa guys as well. Today may be a better day but I am taking a day off. I went for a bike ride around town this morning and will be getting checked out in the scout later today. 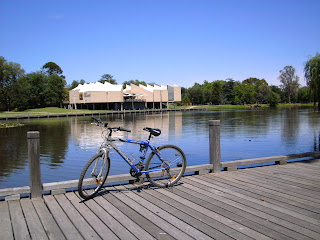 Nice stuff. Do you know why the lift got further apart on the way back? (Different airmass, low sun...something else?)

Hi Chris,
thanks for sharing your Aussie experience with us. I find it very inspirational reading while the snow flies outside.

Your mentioning of the Rock brings back memories of flights out of Tocumwal in early 1982. The Rock was a turnpoint in my first 500k triangle.

Good going on the flight to Temora. It's interesting to hear your comment about avoiding the hills when it's blue. When we flew there in 1987, we found the same thing. We had several flights when the going was quite good in the flats and the hills were dreadful. In fact, one day we had a last leg into the hills and almost everyone landed out there. Before the contest, Ingo Renner said that we should avoid the hills altogether because they were not reliable. He proved to be right.
Anyway, thanks for the blog and a Merry Christmas and New Year.