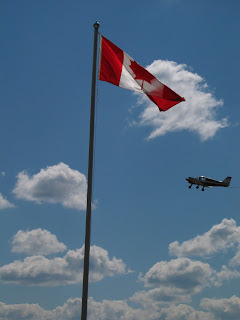 At the end of the first day there were a lot of tired faces and early nights to prepare for today's task offering. Chris's day went well yesterday but his decision to fly the clouds to skirting a blue hole did not work out and he ended up having to accept less than optimal lift to stay in the game, much the same as the guys who went through the blue. The earlier pilots had a bit less trouble which increased their separation and points.

The weather continues under the influence of a large high pressure region rendering a good looking sky with flatter cumulus and has illiminated the chance of spreadout which has been a factor in the past four days. The temperature is also a comfortable 23-25°C so the lake by the saunas is beckoning.

The task today is 50km shorter for each class, Club Class will fly 480.7km. If you have been looking at the task maps you will notice the usual zig zaggy affair with long legs east and west. All of Finland is restricted airspace. The last page of the following pdf file airspace illustrates the restricted airspace sectors. Each day airspace sectors are opened up for glider flying and the pilots have to take particular regard for the ceilings as they cross into a new sector. The grey areas are no fly zones so you will see the reason for the long east west legs and the minimal turns to the north and south.

It is 15:00 local time and the tracker equipped aircraft are in the area around the first turnpoint. We will check in again when they get closer to home.