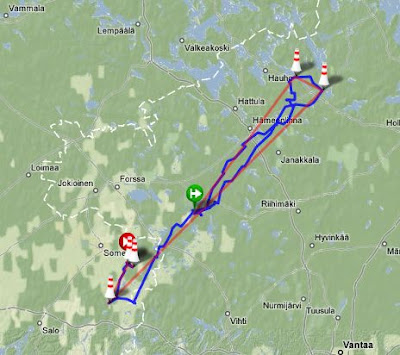 Yesterday I flew my first cross-country flight here in Finland. The cloudbase was low at the start of the day but there were cloudstreets and some strong lift. I first headed east into wind about 60km and then came back to the airport and went 40km downwind to the west. On the way back the clouds started over developing and I had to land off field. It was a nice big field and there were no problems with landing. The farmer was worried about his crop being damaged so we had to carry the glider out piece by piece. Other than getting a bit tired it went okay. Today we cleaned the dirt off the wheel and wingtips. I also entered in a small contest that is being run out of Rayskala called Jannen Kisat. The first day is today but it was called off due to weather. Tomorrow looks like thunderstorms but by Monday it should improve. Friday flight
Posted by Chris at 10:26 AM