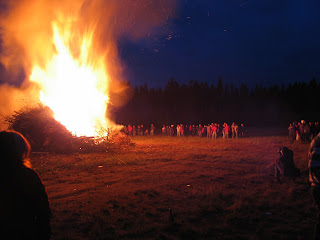 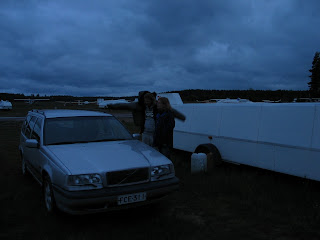 The airport at Räyskälä was buzzing last night. Most if not all the teams have arrived and last night marked the start of the Finnish mid summer festival. This celebration started at 13:00 sharp, until Monday corner gas stations are one of the few places to buy forgotten supplies of staples like milk and more important beer. Since our arrival the weather has only cooperated sporadically and the start of mid summer festival failed to coax the sun out from behind the pouring rain and clouds. However at 22:40 when we set out to join the festivities at the airport it had started to dry out and the night light did not look too different from the light of the morning 12 hours before. Along the normally quiet route to the airport we had to negotiate parked cars and crowds of people making their way to the bonfires that were burning along the shores of the numerous lakes. When we arrived at the briefing hangar the newly constructed bar was conducting a brisk trade. We immediately ran into our friends from team USA and team Australia and got to know some of the British team who are our neighbours at the cottages we are all staying at. Shortly before midnight everyone trekked out to the centre of the airport to gather around a huge bonfire, members of various teams gathered around the bonfire attempted to catch a small rabbit that seemed to be drawn to the flames. No matter how many attempts were made to apprehend it the rabbit would escape into the bush and shortly after make its way back to the edge of the fire.

Räyskälä (pronounced Rouse - as in house – Kala) is home to about 1,000 glider pilots, power pilots and parachutists. There are over 150 trailers in the trailer park and the airport restaurant Café 26 is also the main information hub. There are a number of TV screens that show current satellite, weather and airspace information and high speed internet is also available. The other popular meeting places are the saunas in the campground. I have been told flights are sometimes cut short to make the 6:00 pm sauna.

The flying prospects don’t look too good until Sunday but we have been promised an improvement by the weatherman and we are expecting some reasonable conditions for the start of the contest. We still have a few last minute weighing issues to deal with to get the handicap corrected. From Sunday we should be ready for the main event which starts Wednesday, June 24. During the contest I will try to report the events as they unfold and I will publish the Spot Messenger URL for those that would like to track the contest live.